September 21, 2021
The strange symptom that alerted a worried Mum about something sinister
CATEGORY:Blog

Reader caution: some of the images in this blog could be distressing to some people

“I knew. I just knew. Something wasn’t right and it wasn’t just a virus making her feel lethargic and unable to eat or drink properly,”  Kirra explains through tears about her daughter Shaylagh, affectionately known as Dolly.

Dolly was a bubbly and happy little 5-year-old who – within weeks of complaining of a sore chest and throat – had started to fall asleep at the dinner table and cry when she was eating and drinking. 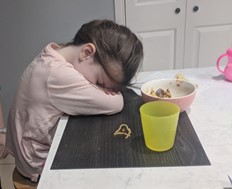 [Pictured: Dolly with her head down on kitchen table with food in plate nearby]

“My happy little girl went downhill so quickly and yet multiple medical appointments couldn’t tell us what was wrong. She was pale and just not herself”

After a visit to the hospital where she was once again told to go home, Kirra refused to leave with her daughter in this state, adamant that more tests needed to be done. Kirra showed one particular Doctor a video of Dolly swallowing which produced a strange squeak and gurgling sound – thankfully, this Doctor proceeded to order a barium swallow test.

“The x-ray showed that Dolly had swallowed a button battery and immediately she was rushed to another hospital for emergency surgery. The Doctors couldn’t tell us if she would survive. I’ve never been more scared in my life” Kirra bravely shared. 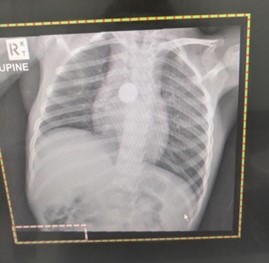 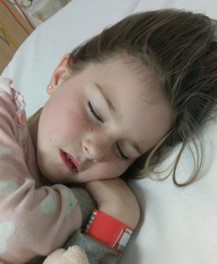 After her lengthy surgery, Dolly was put into an induced coma for three days.

The Doctors told Kirra that there were too many unknowns to predict if Dolly would survive and to just aim to get through, day by day. 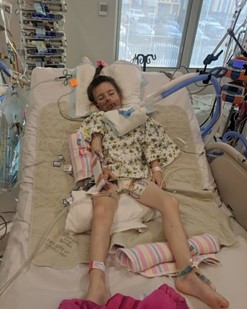 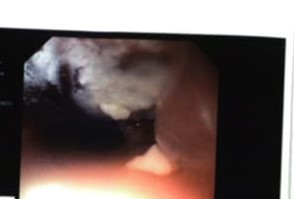 [Pictured: Dolly lying in a hospital bed while in induced coma and internal photo of the damage to Dolly’s oesophagus]

“I’ve never been more scared in my life. I could see my little girl, covered in tubes and machines… I had no idea where she had found the button battery or why she would have put it in her mouth”

When Dolly came out of the coma, she spent two months being fed by a nasogastric tube because the battery had eroded her oesophagus so badly.

Kirra later discovered that the battery was from her television remote control and Dolly has since told her that it just “popped out.” She went on to say that she “played with it and had it in her mouth but when she coughed, it disappeared down her throat.”

Kirra believes the battery could have been ingested up to 6 months prior to discovery. 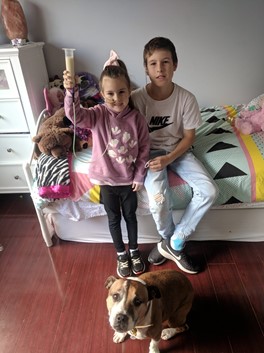 [Pictured: Dolly with nasogastric tube standing next to her brother]

The months and years that have followed for Dolly, Kirra and their family have been long and hard.

Dolly is lucky to be alive but even now, 3 years on, she has gone through a number of operations and the future prognosis is unclear for her.

Dolly has missed months of school and continues to have daily challenges when swallowing food and drinks.

“She still has to have so many operations and we make regular trips to the hospital. But we were one of the lucky ones, I feel so incredibly grateful to have her here with us still. It could have been a very different story.”

Dolly and Kirra are actively sharing their message to encourage parents to speak to their children about the dangers of button batteries.

Every week, 20 children in Australia present to hospital with a button battery related injury – that’s 1,000 per year 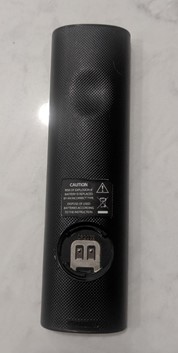 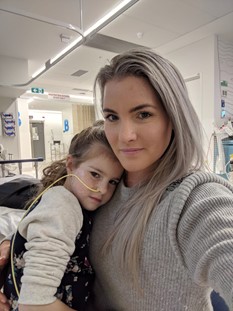 “Any of these ingestions could be fatal. We need to make sure children know that if they find one, they need to tell an adult immediately,” said determined Mum Kirra.

Dolly’s brave warning to other children is: “Don’t play with button batteries. They aren’t toys.”

Her story highlights that button batteries do not only pose a danger to toddlers who put anything and everything into their mouths. If ingested, button batteries can cause serious injuries and ongoing life-changing impacts – to anyone.

Thank you for sharing your brave story with us Dolly and Kirra. 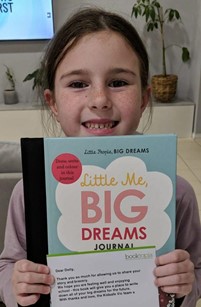 What you need to know about button batteries

These powerful coin-sized button batteries are found in many common household devices. Children often have easy access to these devices and many parents/carers are unaware of the dangers as the products commonly come with the batteries already installed.

What you can do:

If you have been touched by the loss or serious injury of a child, please click here to view a list of services that can provide support and assistance.

Kidsafe Victoria are proud to be working with Button Battery charity, Bella’s Footprints, established in honour of 14-month-old Bella Rees who tragically passed away after ingesting a button battery in 2015. To donate to this Button Battery Awareness Campaign, please head to: https://www.givenow.com.au/crowdraiser/public/bellasfootprintsbuttonbatterycampaign