Driveways are often the height of activity around our homes – they are where we get ready to head off and start our day at work, school or kindergarten, wash our cars, begin our family road trips and welcome and say goodbye to visitors. However, they are also a particularly dangerous place for children.

On average, every year 7 children aged 0-14 years are killed and 60 are seriously injured due to driveway run-over incidents in Australia – that’s one child every week.

The families of Seth, Pippa and Georgina know firsthand the impact that these incidents can have. They have joined us to bravely share their stories in the hope that no other family has to experience what they have. 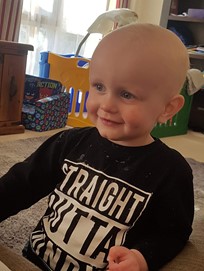 It was January 27th 2019, one of those hot summer days where children are running under sprinklers, air conditioners are whirring and you can’t wait for that cool change to come in.

Jayde and her 4 children aged 7, 5, Seth who was 19 months old and a 6 month old baby, had been cooped up inside most of the day, so when the children were begging to go outside and play with the hose, Jayde thought it was the perfect opportunity to also clean the car.

“My fiancé Brendon had been out fishing with my brother in-law so it was just me and the 4 kids at home. We headed outside where I put 6 month old Patrick in the baby bouncer, the older two kids did their own thing and Sethy went between drawing with me and washing my car with the hose. They all looked so happy to be outside playing in the water.” Jayde told us.

Brendon arrived home and parked his Ute on the road with his boat. As they needed some shopping from the supermarket, he suggested he would take their other car that was parked on the nature strip so he didn’t have to unhook the boat.

In a split second, everything changed

At that time, Seth had walked up into the carport with his little red bucket and Jayde was happy that she knew he was away from the moving car and heading towards the backyard. She continued to draw some chalk pictures on the ground for the children.

In that split second, Seth must have noticed his Daddy walking towards the car and decided to follow him.

“As Brendon reversed the ute off the gutter he abruptly stopped and got out of the car. I ran straight over to see why he had stopped and I immediately said where’s Seth?! Brendon went into instant shock as we saw the little red bucket on the ground.”

As Jayde ran over to the back of the car she could see Seth under the wheel. She grabbed him, screamed for him to wake and started CPR.

Seth was limp and with no signs of life. Jayde continued to try and save him while they waited for the ambulance to arrive.

As the paramedics worked on Seth, Jayde was hopeful they would save her little boy but devastatingly, this wasn’t to be.

I’ll never forget the words from the Paramedic

“They said, I’m sorry but Seth is gone. My life flashed before my eyes and I then went into shock, everything went blurry and into slow motion. I ran over to Seth as they covered him up with white towels. As I laid beside my baby crying and screaming for him to please wake up, don’t leave me, the police officers had taped off my house. It didn’t seem real.”

The lead up to Christmas is a special time for families. Planning presents, family get togethers and Eve and her family loved their Christmas shopping trips to the city. Watching their precious little 14 month old in her frilly pink dress, mesmerised by the beautiful decorations in the Myer window; Eve and her Mum felt so content.

“By the time we got home we ditched our plans for the night and my husband brought home fish and chips for dinner. We live on 10 acres and have a long driveway and, at that time, a roundabout with a fenced area inside it with a playground for the girls to safely play in.” shared Eve, Pippa’s Mum.

Eve’s husband Adrian had parked his truck directly between the house and the play area and put on music from the truck whilst they ate. Eve asked him to move the truck so they could continue to sit where they were eating and also be able to watch the kids play in the playground safely. This was a regular routine for this loving family.
Eve held Pippa’s hand and Sophie stood safely in the play area.

“My husband moved his truck to our skip bin to put some rubbish in it. The car stopped and Sophie ran to him. I let go of Pippa’s hand so she could go to him too. The music was still loud but I figured that he was picking up Sophie. I kept my eyes on Pippa the whole time to make sure she was safe. I assumed he wasn’t going to move the truck again and he assumed I still held Pippa’s hand. I had no feeling anything was wrong until the break lights came on the back of his truck…”

There was no way he could have seen her

Eve had thought that her husband was leaving the ute there for them to listen to the music.

Pippa was standing right in front of the truck. There was no way he could have seen her.

“I jumped up instantly and ran straight to her whilst the vehicle inched forward. I watched while it tipped her over and only her head fell directly under his front tire. She died instantly. I got to the truck and banged and yelled for him to stop. I reached under the vehicle to pick her up..”

Adrian called the ambulance as Eve tried to resuscitate their little girl. The Police and Paramedics arrived but devastatingly, it was too late. 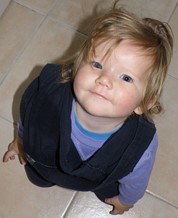 Emma and Peter Cockburn’s lives were extremely busy. With 4 children under the age of 5 and with a thriving building business, they were happy, hectic and loving the life they had created for their family.

Emma was at home with their 4 daughters, Charlotte, 5, Anna, 3, Elizabeth, 2 and Georgina Josephine, just 15 months old.

Just as she always did, Emma had left her children safely in the house whilst she mowed the lawn but this time, Georgina had heard the familiar noise of her Dad returning home in his ute.

Somehow she managed to get into the garage

“We don’t know how. The door may have been left ajar, no one knows”, Emma explains.

As Peter returned from work he had raised the automatic roller door, as he always did, and reversed his ute and tool trailer into the garage.

On this tragic day, Georgina was behind the trailer, unable to be seen by the rearview mirrors.

“I was on the mower with ear plugs in and all of a sudden I could see Peter frantically running towards me waving and I knew something was wrong. I stood up and took the ear plugs out and heard him say – ‘I’ve run over Georgie.”

In complete shock, Emma and Peter ran to Georgina and performed CPR whilst calling the ambulance.

“We didn’t say it to each other but we both knew she was gone already. It was instant. Our lives changed in one single moment”

We thought our home was safe

“We had thought, like any other parent, that our kids were safe in their own home. We had deliberately built our house with kids in mind; play areas at one end of the house, garage at the other, a safe fenced-off backyard area where they could play, well away from the garage and driveway. It never occurred to us that the access door between the house and garage would be an issue.”

Driveway run-over incidents can happen to anyone

Low speed run-overs can happen to anyone, anywhere, anytime– from the driveway at home, to a work site or factory, in a quiet cul-de-sac street, in a caravan park, or a busy shopping centre car park.

It can happen in a split second and can change lives forever.

Children’s unpredictability, their inquisitive nature and the fact that they are surprisingly quick and mobile, places them at increased risk.

Most driveway runovers occur in the driveway of the child’s own home, or in a friend or relative’s driveway. The driver is usually a parent, relative or family friend.

In 85% of cases, the driver does not know that a child is close to the vehicle; they think they are being looked after elsewhere.

All cars have a blind spot – some up to more than 15 meters behind the vehicle – which can make it difficult to see a child. This means that any car can be involved in a driveway run over, not just larger vehicles such as four wheel drives, vans and trucks.

A message from Seth’s parents 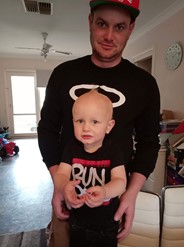 “Seth was buried on the 4th of February 2019. It has been 3 years now since Seth’s tragic accident and we are just as broken as the day it happened.

Never in my worst dreams would I have thought something like this would happen to me. I was one of those parents who would always watch my kids around driveways, pools, anything that could harm them but in that split second, my life changed forever.

Please never assume your children are somewhere safe, always watch them with your life, never take your eyes off them, even for a second.